Tarpon Tale in the Florida Keys 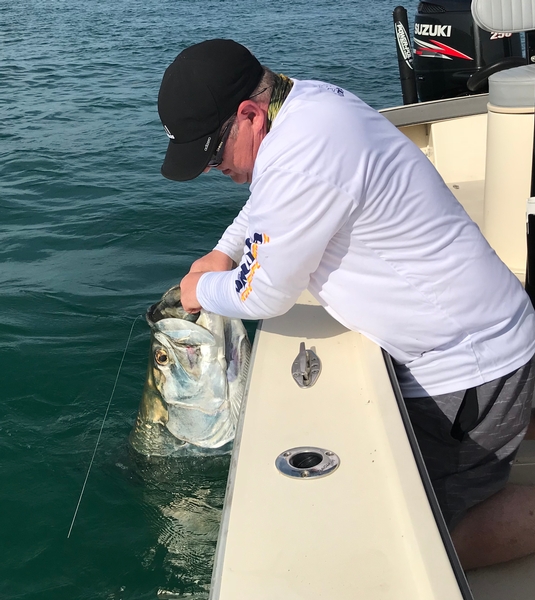 Despite the rain and wind the bite was great.  The Tarpon were schooled up thick and my client Tim Kimball was hooked up to his first Tarpon.  Tim flew in from New Hampshire and never fished for Tarpon before.  An avid outdoorsman, he was in for a surprise on this adventure.  Tim faught the first Tarpon for a half hour before landing it.  Then he jumped three more Tarpon that spit the hook, broke off on the bridges and lost to big sharks.

At the end of day one Tim managed to hook and land his second Tarpon of the trip.  He put a wooping on that Tarpon as did the Tarpon on him.  As we headed in for the day I could see that Tim had enough for one day and was ready for a cold beverage and the freshest fish the Keys has to offer.

Day two for Tim started out a little slower than the day before, but he hooked his first Tarpon of the day by 9:30 a.m.  Tim battled this Tarpon under a bridge then the Tarpon jumped completely out of the water two times and on the second jump the Tarpon shook his head so hard it broke the leader.  Tim managed to boat two Tarpon by 2:00 p.m.  I could see that Tim was worn out from the last two back to back Tarpon.  By 3:45 p.m. Tim had hooked a fourth Tarpon.  He faught the fish and was doing a great job until Tim's Tarpon got tangled up with another boat that also had a Tarpon hooked up.  I could see Tim was waring out after so many fish battles.  I jumped in and managed to get the two fish untangled, unfortunately the line broke on the other boat's Tarpon but that was great for Tim.  The Tarpon was now in open water and made a long run.  I told Tim to get going, that Tarpon is going to spool you if you don't reel some of that line back!  Tim worked hard to get line back on the reel.  As the Tarpon got closer to the boat it took off like a bolt of lighting toward the back of the boat and snapped the Rod and broke the line with a loud Pop!  I looked over at Tim, I could tell he was done for the day.  Tim looked over at me and said lets go Snapper fishing tomarrow Captain, and I said sounds like a good plan!